Cost of sales, for the six months ended April 30, 2021, rose by 35% to close at $166.38 million (2020: $122.84 million). This resulted in gross profit decreasing by 7%, amounting to $257.87 million for the six months relative to $278.13 million reported in the previous corresponding period. Indies noted, “this is due to the fact that during the height of the pandemic, global and local safety measures led to some logistics challenges and unavoidable costs. These costs are firstly, increased sea and air freight charges which were further compounded by the urgent need to acquire, by air freight, some out-of-stock items.” For the second quarter ended April 30, 2021, gross profit closed at $119.76 million (2020: $150.27 million).

Furthermore, “the company was also impacted by the cessation of in-store and outdoor marketing activities as well as lower consumer disposable income that led to a one-off writing-off of expired goods which had been launched pre-pandemic. These were primarily non-prescription Over- The- Counter (OTCs) herbal supplements.” according to indies.

INDIES highlighted, “In addition to the afore mentioned comments, net profits for 2021 was also impacted by higher finance cost associated with the bond issued in the second half of 2020.” 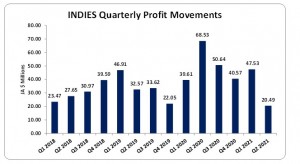