Indies Pharma Jamaica Limited (INDIES) based on audited results, reported revenues for the twelve months ended October 31, 2019 of $729.45 million, an increase of 15% when compared with the $636.17 million booked last year.

Cost of sales amounted to a total of $268.78 million relative to the $243.38 million reported for the same period last year, a 10% increase year over year.

Administrative expenses jumped up by 41% to close the year at $338.12 million (2018: $239.87 million). The company also noted that, “goods valuing approximately 46 million expired during the twelve-month period ending October 2019.”

Management noted that, “the company remains debt free, which indicates its good financial health and shows that it is in a good position for future growth.” 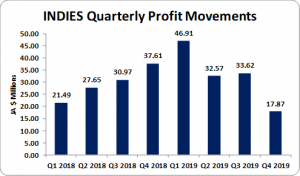