Title sponsor Mayberry Investment Limited has pumped $250,000 into the sixth staging of the SW Isaac Henry Track and Field Meet set for February 22 at National Stadium starting at 8:35 am.
For the first time in Jamaica there will be a mixed 4x400m relay, it was announced at the media launch at Knutsford Court Hotel yesterday.
Kayree Berry-Teape, CEO of Mayberry Investment Foundation, said her organisation was very proud to be associated with this meet. 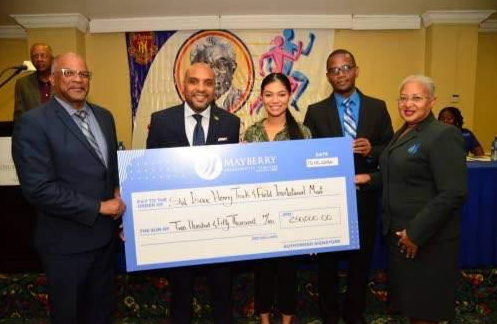 “The reason is when you have the opportunity to mould young minds and in such a way that they enhance the environment, they enhance the living conditions, they enhance every single person around them, it is truly a gift,” she said.
Dionne Marie Harrison, Mayberry’s digital marketing manager, handed over the symbolic cheque of $250,000, and while doing so, noted that track and field is much a part of Jamaica as ska, mento, and reggae.
“While this event has done a tremendous job in honouring the late Isaac Henry, past principal of STATHS (St Andrew Technical High Schoo), it is also doing a tremendous service to Jamaica through perpetuating one of the many things for which this country is celebrated across the globe,” Harrison noted.

“We are excited to see the talented girls and boys put their hours of dedication on display and give us a preview of what we can expect at the ISSA/Grace Kennedy Boys’ and Girls’ Athletics Championship in March,” she added.
The meet will also have two other major sponsors in GraceKennedy, and its brand Western Union.
Meanwhile, former head girl of STATHS Janice Riley thanked the sponsors for their continued support of the meet.
“I cannot express enough how much GraceKennedy and Western Union continue to be proud to support this staple development meet named after the iconic Sir Henry, our past principal,” said Riley.

“And, of course, it makes perfect sense [as] Western Union is an international remittance icon and then it doesn’t get more iconic in terms of Caribbean and international brand than GraceKennedy, whose 98th birthday is tomorrow Valentine’s Day,” she noted.
Grace Wright, representing hydration sponsor MikiAyana Company Limited, bottler and distributor of Tropical Blue Natural Spring Water.
“Tropical Blue Natural Spring Water has been the proud and exclusive water sponsor of the SW Isaacs Henry track meet since its inception, and at this sixth staging we are committed and indeed thankful in partnering once again in celebrating and honouring the memory of beloved SW Isaac Henry,” said Wright.
Past student and top athletics agent and Manager Claude Bryan will be this year’s honoree.
Bryan has guided the careers of Olympic champions Veronica Campbell-Brown and Omar McLeod of Jamaica and Shaunae Miller-Uibo of The Bahamas.

He also has under his care World Championships gold medallist Steven Gardiner of The Bahamas and American 100m hurdle world record holder Kendra Harrison.
Bryan represented St Andrew Technical High School at cricket and football.
This year the meet will have 71 events – 41 on the track and 30 in the field. The 1500m open for boys and girls will get things going at 8:15 am, with a proposed 6:00 pm closing time.
– Howard Walker