Jamaica Teas Limited (JAMT) for the 9 months ended June 2017 reported a 26% increase in Revenue to total $1.18 billion (2016: $938.63 million). Revenue for the quarter saw a 35% increase to total 421.01 million relative to 312.72 million 2016. According to the company, “Revenues at our supermarket division amounted to $106 million for the June Quarter and $308 million year to date and now exclusively reflects the results of our unit in Kingston following the sale of our Savanna La Mar store in 2016; sales at Chancery street increased from last year by 5% year to date and 10% for the quarter.”

Notably, Other income reported a 3% growth year over year to $47.97 million relative to $46.72 million a year earlier. According to the company “Physical completion of the remaining homes in this project is anticipated for the fourth quarter of which all but two homes are under sales contracts. During the quarter the company experienced hold up in the completing the sale of homes due to delays in the update of the new property tax rates applicable to this development.”

“For the balance of the financial year and the oncoming 2018 fiscal year we expect to build on gains achieved this year aided by new products and commencement of construction of an apartment complex in Kingston scheduled for completion late 2018. KIW International is expected to transition from a real estate owner to an investment company to take advantage of investment opportunities locally and overseas”. 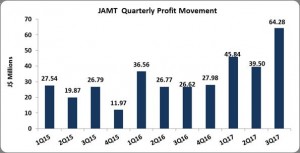