Jamaican Teas Limited (JAMT) reported a 31% increase in revenues to total $906.17 million (2019: $692.45 million). For the quarter, revenues amounted to $473.27 million a 51% increase when compared to $314.22 million in the previous corresponding period. Management stated that, “this increase arose because in February and March 2019, our supermarket was operated by Bay City Foods Ltd, which at that time was only 50% owned by the Group. These two months’ sales were not reflected in last year’s consolidated sales. The remaining $53.7 million increase in sales reflects a 30% increase in export sales and a 9% increase in domestic sales in the manufacturing business. The jump in exports reflects a reversal of the temporary customer de-stocking that took place last year.”

JAMT further noted that, “There were no real estate sales this quarter, or in the prior year quarter.”

Other Loss for the period amounted to $610.40 million versus other income of $64.57 million recorded the prior year’s corresponding period. Other loss for the quarter closed at $508.14 million compared to other income of $31.65 million documented for the same period last year. Management stated, “The large loss in Other Income reflects the fair value losses of QWI referred to above.” contributing to other losses was a ‘Fair Value Loss on Investments’ of $653.93 million relative to a gain of $26.15 million in 2019.

Sales and marketing cost declined by 7% to $26.53 million for the six months ended March 2020 relative to $28.44 million for the same period of 2019. Administrative expense went up by 34% totaling $117.33 million (2019: $87.56 million). For the quarter administrative expenses and sales & marketing costs closed at $60.86 million (2019: $45.69 million) and $12.73 million (2019: $17.87 million), respectively. JAMT mentioned that, “The decrease in marketing expenses for the quarter resulted from the shifting of programmed domestic spending to the first quarter to allow for launches of the Caribbean Select Teas in that period.” Also, “The $15 million increase in administration expenses for the quarter ($30 million for the half year) primarily reflects the exclusion of two months’ supermarket operations and operations at QWI in the year ago quarter. “

Additionally, “The increase in interest expense is primarily the result of interest on QWI loans that did not exist in the year ago quarter.”

Finance cost for the period under review amounted to $18.82 million (2019: $8.67 million), while for the quarter finance costs closed at $8.75 million versus $3.44 million in the prior year’s corresponding quarter.

JAMT stated that, “The most negative development for us this quarter has been the sharp fall in the prices of stocks on the Jamaican Stock Exchange. This has resulted in significant unrealized investment losses for QWI Investments Ltd (QWI). Most of these losses are not attributable to the shareholders of JTL but to the non-controlling interests in QWI. $117 million of QWI’s net loss for the quarter is included in JTL’s Group results, triggering an attributable loss for the quarter of $46.7 million. QWI has taken steps to minimise further losses by repaying it’s debt and adjusting its securities portfolio. The losses incurred by QWI Investments are primarily unrealized losses and while they impact the net assets of the Company and the Group, they are not a major risk to our liquidity.”

Notably, “At the supermarket, sales declined over 15% in April as a result of the restrictions placed on our operating hours from the 6:00 p.m. to 6:00 a.m. curfew in Kingston.The real estate business should contribute significantly later in the year from proceeds from the sale of apartments.”

As at March 2019, the Company total assets amounted to $3.12 billion, an increase of 72% when compared to the $1.81 billion reported as at March 2019. Large contributors of this increase are; ‘Investment property’, ‘Housing under Construction’ and ‘Other Receivables’ which totaled $275.22 billion (2018: nil), $223.32 billion (2018: nil) and $116.13 billion (2018: nil) respectively. Management highlighted, “Since our September year end, QWI received the proceeds from its IPO which was included in Other Receivables and applied this money towards the purchase of additional quoted equities and reducing its Accounts Payable.” 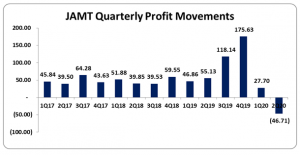