Jamaican Teas Limited (JAMT) reported a 35% increase in revenues to total $1.22 billion (2020: $906.17 million). For the quarter, revenues amounted to $608.55 million a 29% increase when compared to $473.27 million in the previous corresponding period. Management stated that, “Sales at our supermarket decreased by 11 percent.This was a direct result of operating restrictions on store hours due to longer curfews on the island, as compared with a year ago when at least two months of the quarter were not affected by school closures and other COVID related restrictions.”

Sales and marketing cost declined by 31% to $18.27 million for the six months ended March 2021 relative to $26.53 million for the same period of 2020. Administrative expenses went up by 14%, totalling $133.56 million (2020: $117.33 million). For the quarter administrative expenses and sales & marketing costs closed at $70.74 million (2020: $60.86 million) and $9.51 million (2019: $12.73 million), respectively. JAMT mentioned that, “The decrease in sales and marketing expenses for the quarter and half year primarily reflects the curtailment of some of our overseas marketing activities due to COVID related travel restrictions.”

Finance cost for the period under review amounted to $16.68 million (2020: $18.82 million), while for the quarter finance costs closed at $9.60 million versus $8.75 million in the prior year’s corresponding quarter.

JAMT stated that, “The outlook for manufacturing continues to be positive, with exports continuing to be the star performer. As our shareholders are aware, Jamaica and the rest of the world are still grappling with the effects of COVID-19. While vaccinations have been rolled out, the world has not reached a stage of immunity. Accordingly, we face the future cautiously with the expectation that we will be able to continue our operations without any major interruptions.” 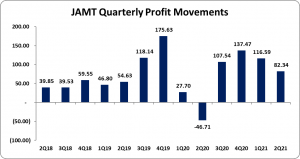