Jamaican Teas Limited (JAMT) reported a 4% increase in revenues to total $2.27 billion (2020: $2.20 billion). For the quarter, revenues amounted to $524.66 million (2020: $786.74 million). JAMT highlighted that, “$248 million of this decrease resulted from the sale of 12 of the studios at the Manor Park complex in the year ago quarter vs no real estate sales this quarter. The remaining $16 million sales reduction mainly reflects a decrease in export sales partly offset by an increase in domestic sales in the manufacturing business.”

Other income was reported at $157.80 million versus other income of $78.54 million in the prior year. JAMT noted, “The increase in Other Income primarily resulted from higher realized investment gains at QWI. The reversal from Fair Value Losses on Investments of $482 million to Gains of $354 million arose from the significant recovery QWI experienced in its shareholdings during the year, as the effects of COVID-19 on many business operations began to reverse.”

Administrative expenses increased by 5% to $243.95 million for the year ended September 30, 2021 relative to $233.17 million for 2020. Sales and Marketing costs contracted by 33% totaling $34.65 million (2020: $51.73 million). For the quarter administrative expenses and sales & marketing costs closed at $57.24 million (2020: $68.61 million) and $7.54 million (2020: $11.01 million) respectively. The Company noted, “The reductions in sales costs resulted from curtailed activity in some of our overseas markets due to COVID related travel restrictions which limited our ability to implement certain overseas sales programmes.” Additionally, “The increases in interest expense during the quarter and full year resulted from higher borrowings at QWI.”

JAMT noted, “The Group has now, finally received planning approval for a major expansion of the factory to meet and prepare for continued growth and this project is expected to begin construction in 2022.Also next year the manufacturing division will relocate its soup and spices activities from Bell Road to a new location in the Richmond Park area of Kingston.” 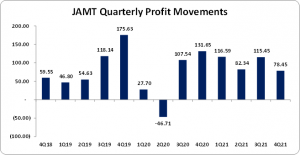