Jamaica Broilers Group (JBG) for the nine months ended January 31, 2018 reported total revenues of $35.68 billion, an 11% increase relative to $32.12 billion reported in for the comparable period in 2017. Revenue for the third quarter amounted to $12.66 billion, an 8% increase compared to $11.69 billion booked for the corresponding quarter of 2017.

JBG noted, “Jamaica Operations reported a segment result of $2 billion, which was $382 million or 16% below last year’s normalized segment result of $2.4 billion. This decrease was mainly attributed to higher distribution costs as a result of a rebalancing of the inventory in the poultry segment, as well as some third-party storage issues that took place in the first quarter.”

Operating expenses of $6.92 billion were reported for the period, approximately 10% more than the $6.32 booked for the same period in 2017. The company noted this increase was “due primarily to inflation and increased development costs”. Of total operating expenses; distribution costs totalled $1.32 billion (2017:$1.04 billion) while administration and other expenses totalled $5.60 billion (2016: $5.27 billion), a 6% increase year over year. Operating expense for the quarter closed at $2.34 billion, up from $2.20 billion reported for the third quarter ended January 31, 2017.

JBG reported finance loss of $43.24 million compared to an income of $287.74 million for the prior year. The company noted, “This is primarily due to the appreciation of the Jamaican dollar against the United States dollar.” 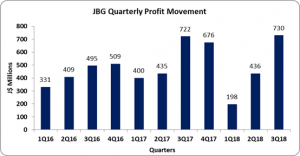