Other income decreased 44% from $271.33 million for the first quarter of 2020 to $150.65 million in 2021. Distribution costs increased 35% to close at $631.17 million relative to $467.21 million recorded for the prior year’s comparable period, while administration and other expenses rose by 25% to $2.38 billion (2020: $1.90 billion). Management noted, “During the prior year, at the onset of the COVID-19 pandemic, the company took aggressive steps to minimise the financial impact from the drastic loss of revenue which the company was experiencing and anticipating. These steps involved a reduction in salaries paid to staff and a proactive curtailing of variable expenditures which resulted in lower overheads during that quarter in the 2020/2021 financial year.”

JBG reported that, “This decline is primarily due to a 13% reduction in our gross margin ratio due to the rapid increases experienced procuring raw materials during the quarter due to the continued impact of the COVID-19 pandemic. Despite the exponential rise in raw material and shipping costs, the company has been taking steps to manage costs while not passing on the full increases to our customers.” 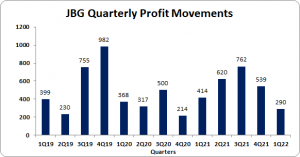