Profit before taxation amounted to $46.32 million relative to $93.52 million reported for the corresponding period in 2018, representing a 50% decline year-on-year.

Total comprehensive income for the nine months amounted to $46.32 million compared to $93.52 million booked in 2018.

JETCON noted, “sales for October were ahead of the similar period in 2018 and we are cautiously optimistic that the sales for the final quarter will exceed that of the 2018 quarter and help to add to the profit reported for first nine months of the year.”

The company, as at September 30, 2019, recorded total assets of $664.20 million, an increase of 6% when compared to $626.77 million recorded last year. This rise was attributed primarily to the increase in Jetcon’s fixed assets which ended the period at $132.87 million, a 56% increase when compared to 2018’s $85.30 million. The company mentioned, “we acquired additional property next to our existing main location resulting in fixed assets growing by $47 million over the amount on record as of June 2018. The other main asset inventories declined as we continue to work off excess inventories.” 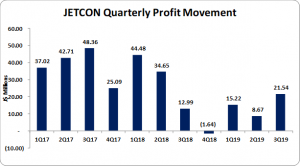