Jetcon Corporation Limited (JETCON) for the three months ended March 31, 2019, reported a 20% fall in turnover to $246.07 million (2018: $305.94 million). According to the Company, “We attribute the fall in sales to customers realigning their finances to qualify for mortgages as the housing market gains strength and persons to go in search of houses. However we expect that some normality will return to the market soon. To date we have seen increased orders for cars for the month of May.”

Consequently, profit before taxation amounted to $15.22 million relative to $44.48 million in 2018 representing a 66% decrease year-on-year for the period.

There were no tax charges for the period, resulting in a first quarter net profit of $15.22 million compared to $44.48 million for the corresponding quarter of 2018.

The company, as at March 31, 2019, recorded total assets of  $559.19 million, an increase of 8% when compared to $517.92 million recorded last year. The increase in the asset base was due mainly to a $65.89 million increase in inventory which closed at $401.52 million (2018: $335.63 million). JETCON noted the movement in inventory was, “owing to the decline in sales not depleting stock as fast as expected. Total receivables amount to $65 million which include amounts deposited with suppliers for goods.” 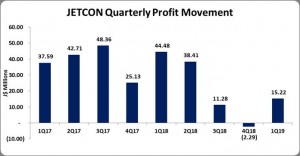