JMMB Group Limited – (JMMBGL) booked net interest income of $5.82 billion compared to $4.99 billion in 2020, an increase of 17%. Of this, interest income grew by 20% to close at $13.15 billion, from the $10.94 billion booked in 2020, while interest expenses increased by 23% to total $7.33 billion relative to $5.95 billion in the prior year. Net interest income for the quarter improved 15% to close at $2.96 billion relative to $2.56 billion a year earlier. JMMBGL noted that, “this was facilitated by increased economic activity relative to the prior period as well as continued accommodative monetary policies in the countries in which we operate. Further, our clients continue to demonstrate confidence in the value of solutions and services which was evidenced by strong growth in the loan and investment portfolios.” Furthermore, “Global investor sentiment improved when compared to the prior period, especially as the global vaccination programme is underway. There was strong demand for emerging market assets as global interest rates were low and investors were in search of yields. Within this context, we continued to successfully execute our trading strategy and were able to identify and capitalize on market opportunities that delivered superior results.”

Fees and commission income for the period amounted to $2.52 billion, an increase of 66% on the $1.52 billion recorded for last year’s corresponding period. According to the company, this “reflected increased economic activity as well as significant growth in managed funds and collective investment schemes across the Group.” Foreign exchange margins from cambio trading recorded an increase of 14% year over year to close the period at $1.22 billion (2020: $1.07 billion). While net gains from securities trading showed an increase of 21% totalling $3.88 billion (2020: $3.20 billion). Whereas, dividend income for the period rose 11% to close at $25.81 million (2020: $23.28 million).

Operating expenses amounted to $9.36 billion, a year over year increase of 24% (2020: $7.53 billion) which led to an operating profit of $4.11 billion, an increase of 26% when compared to the $3.26 billion booked the year prior. According to JMMBGL, “for a part of the prior period we implemented short term cost containment measures to dampen the effect of the pandemic. Since then, we have pivoted to growth mode and this is reflected in our costs. Operating expenses included inflationary increases as well as strategic spend related to our longer term initiatives aimed at improving the posture and positioning of the Group. Nevertheless, the operational efficiency remained stable at 66% and we will continue to focus on projects to cause scale and efficiency and thereby contribute to long term shareholder value.”

Other income booked for the period rose to $3.78 million relative to the $2.38 million reported for the corresponding period in 2020. JMMBGL also booked share of profit of associate of $2.08 billion versus share of loss of $106.97 million booked last year. 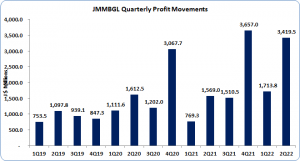