The Food and Drink Division reported a 29% in revenue to total $11.34 billion relative to $8.81 billion reported in 2017. The Group stated that, “the F&D Division benefitted from a particularly strong performance from our European juice business – the largest business in the division. Our fresh juice business entered new markets with new products and new customers and achieved record sales. We now have a strong book of business supplying high quality juice to leading retailers in Holland, Belgium, Germany, Scandinavia, the UK and the Czech Republic. During the year we installed new fresh juice extraction lines and acquired real estate to support our ongoing business expansion.”

Jamaica Producers further highlighted that, “our Caribbean Food businesses (JP Tropical Foods, JP Farms and Tortuga collectively) also experienced improved overall results. JP Tropical Foods benefitted from strong export growth and new product development initiatives. We were particularly pleased with the growth in our fresh banana sales. We expanded production on our farms, strengthened our quality systems and generated sales growth of over 40% in the year.

Logistics and Infrastructure increased 12% year over year to total $8.26 billion (2017: $7.35 billion). JP indicated that, “the Logistics and Infrastructure division continues to benefit from significant capital investment and business development initiatives to advance Kingston Wharves as a leading regional multipurpose and multi-user terminal and a market-leading logistics service provider as well as increased economic activity and trade flows in Jamaica and across the Caribbean for the range of cargo types served by our business.”

JP’s marketing, selling and distribution expenses rose 18% to close at $3.45 billion, this compares to $2.93 billion booked a year earlier. JP also recorded a share of profit in joint venture and associated company of $120.31 million, relative to a profit of $3.78 million in the previous year.

The Group mentioned that, “Jamaica Producers Group and its subsidiaries will continue a programme of investment that is designed to improve our products and services while enhancing operating efficiency. We are of course mindful of the heightened range of general risks to global trade. We are also attentive to the more specific risks and uncertainties that will affect trade flows with the Caribbean and importantly, may impact the competitiveness of the port of Kingston as a leading transhipment and logistics centre for the region. We are confident that these challenges can be overcome with our proactive business leadership, supported by practical public policies. We are also aware of potential threats to consumer demand in our core markets. We believe that we benefit from the fact that our products are recognised for quality and innovation and have strong positions in our core markets across Europe as well as in the Caribbean, the USA and regional travel retail.” 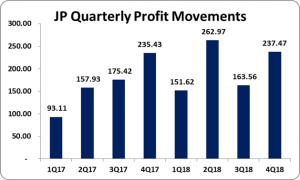