The Food & Drink Division contributed a 9% increase in revenue to total $9.04 billion relative to the $8.31 billion reported in 2018. The Company highlighted that, “During the third quarter and year-to-date, the Division benefitted from a strong result in our European juice business, improved yields on our banana farms in Jamaica and solid growth in regional consumer and travel retail markets in which our JP St Mary’s and Tortuga brands trade.”

Logistics and Infrastructure increased 7% year over year to total $6.34 billion (2018: $5.94 billion). JP stated that, “During the third quarter, Kingston Wharves benefited from growing volumes of bulk, breakbulk and automotive shipments to Jamaica and the region. JP Shipping Services Limited opened its new Caribbean Logistics Centre in London during the quarter and is already consolidating and shipping commercial cargo, personal effects and vehicles to Kingston, Montego Bay and all the CARICOM countries on a weekly or fortnightly basis from this location.”

JP’s marketing, selling and distribution expenses rose 14% to close at $2.79 billion, this compares to $2.45 billion booked a year earlier. As such, profit from operations amounted to $2.79 billion relative to $2.10 billion booked for the corresponding period in 2018. Profit from operation for the quarter amounted to $955.45 million compared to $726.64 million reported for the corresponding quarter of 2018. JP also recorded a share of point in joint venture and associated company of $47.28 million relative to $31.93 million in the previous year. 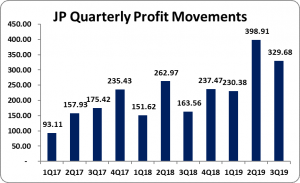