Jamaica Producers Group Limited (JP), for the three months ended March 31, 2020, booked an 8% increase in revenue to total $5.15 billion compared to the $4.79 billion reported in 2019. JP stated, “As a result of the emerging adverse impact of the COVID-19 pandemic on the global economy, the performance of the Group was mixed.”

The Food and Drink Division reported a 12% increase in revenue to total $3.07 billion relative to $2.75 billion reported in 2019. The Group stated that, “During the first quarter, the Division experienced reduced food sales in travel retail, food service and convenience channels, but this was more than offset by increased sales in supermarkets. Regrettably, our cost of operations was adversely affected by extraordinary measures to maintain our customarily strong service levels across all aspects of our international fresh fruit and vegetable supply chain and food processing facilities during COVID-19.”

Logistics and Infrastructure increased by 2% year over year to total $2.09 billion (2019: $2.04 billion). The Group highlighted that, “During the first quarter, a general slow-down in global trade impacted the volume of trans-shipment containerized cargo handled by the terminal. This was offset by growth in value-added logistics services, including the storage of excess inventory of durable goods for global markets.”

JP mentioned that, “JP Shipping Services Limited handles the consolidation and shipping of commercial cargo, personal effects and vehicles between the UK and CARICOM countries on a weekly or fortnightly basis. Lockdowns and other restrictions on movement and business activity in both the UK and the Caribbean, as a result of COVID-19, reduced the volume of cargo available for shipment and adversely affected this business during the first quarter.” 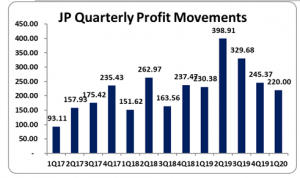