Jamaica Stock Exchange Group (JSE) for the six months ended June 30, 2022 recorded total revenue of $1.13 billion, a 33% increase when compared to the $851.94 million booked the prior comparable quarter, management noted, “The increase can be attributed to improved market conditions and market activities which has resulted in the significant improvement in Cess and Fee Income.” Of this:

o   E-campus income decreased by 17% to $17.91 million relative to $21.6 million documented in the prior comparable quarter.

o   Other operating income rose 17% during the period to total $58.69 million compared to $50.24 million booked in the same quarter last year.

o   Staff cost increased 21% to total $326.41 million for the period under review (2021: $269.61 million) and was primarily due to, “a 6% increase in salaries as well as a reclassification exercise resulting in the upward movement in salaries of some positions,” JSE noted.

o   Depreciation and amortization totalled $36.77 million, relative to $32.93 million recorded in the prior comparable period.

o   Securities commission fees posted a 86% increase to close at $37.77 million (2021: $20.35 million) and as stated by JSE, “reflecting the direct correlation between Cess revenue and fees paid.”

o   Net impairment losses on financial assets closed at $4.02 million, relative to a gain of $1.17 million booked in the previous corresponding quarter.

Tax charges for the period totalled $138.66 million (2021: $91.04 million). As such, JSE reported a net profit for the period of $279.75 million compared to a profit of $190.42 million in the prior comparable period, reflecting a 47% increase. Notably, JSE highlighted that, “the increase in Net Profit reflects the improvement in Total Income during the quarter, primarily driven by the higher trading values in the market.” While, for the quarter, net profit amounted to $143.77 million (2021: $116.29 million).

JSE highlighted, “The Second Quarter results has been good and the outlook for the year is for improved performance, as investors and companies continue to demonstrate confidence in the economy despite the lingering threats and impact of COVID 19 and other market uncertainties. We also believe that despite the geo-political unrest which will undoubtedly have some impact on the economy, overall, we do not expect that this will significantly affect income due to our successful diversification strategies.”

Additionally, “The JSEG will continue in the medium to long term to pursue a strategic path of growth through the exploration and promotion of new and existing markets, new product development and the continuous improvement in systems and service delivery to the s customers and other stakeholders.” 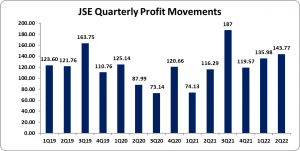