Of this:
Staff cost increased 15% to total $86.06 million for the period (2017: $75.11 million) and was primarily due to, “salaries associated with new staff hires required to support new business lines and expansion of current business.”
Depreciation and amortization totaled $12.50 million for the year relative to $6.20 million in 2017 and was as a result of the, “acquisition of new assets and an increase in the revaluation of property.”

Professional fees amounted to $17.25 million (2017: $10.63 million) a 62% increase year over year. JSE noted, “This was due to payment of fees to consultants engaged to assist the JSEG in specific growth related projects.”

JSE also noted, “There were two listings on the Junior Market in the first Quarter. It is expected that for the remaining quarters additional listings will occur. The positive movement in Fee Income is expected to continue as the customer base increases. The Group continues in the medium term to pursue a strategic path of growth through the promotion of new and existing markets, new product developments and continuous improvement of service delivery to the Group’s customers and their stakeholders.” 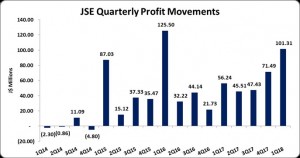