Knutsford Express Services Limited for the nine months ended February 28, 2021 reported total revenue of $456.37 million, a 51% decrease when compared with the $925.23 million reported for the same period in 2020. For the third quarter, revenues amounted to $185.05 million, a 42% decrease relative to the $318.04 million booked for the corresponding period in 2020. According to KEX the decrease was driven by, “the ongoing COVID19 pandemic which continues to affect passenger travel negatively as a consequence of the continuation of government implemented curfews.”

“We however, have responded by increasing our courier service which have become very popular with individuals and companies alike. During this quarter we opened another courier outlet at Sovereign Center on the Boulevard on Washington,” as per KEX.

Loss before taxation for the nine months amounted to $60.64 million relative to  profit before taxation of $113.26 million reported in 2020. No taxes were incurred year to date compared to $10.08 million in the same period last year.

Management noted, thought the company is hearten by the impact COVID19 has made on profit there is still like at the end of the tunnel. Notably, “new business initiatives such as the investment in our Drax Hall business Centre development has resulted in the completion of phase 1 and all shops fully tenanted. Demand for the shops and the response to phase 2 which is due for completion in the first quarter of our new financial year (July 2021) is also very encouraging and signals positive contributions to our company in the ensuing 2021/22.” 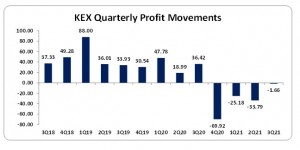