Knutsford Express Services Limited for the nine months ended reported total revenue of $841.93 million, a 24% or $164.80 million increase when compared with the $677.13 million reported for the same period in 2018. For the third quarter, revenues amounted to $286.82 million, a 24% increase relative to the $231.71 million booked for the corresponding period in 2018. According to KEX, “the increase was due in part to the increased patronage of overseas visitors travelling between our various destinations, in particular to and from Negril where the number of our departures doubled in the quarter.”

Consequently, net profit for the period also amounted to $157.94 million, representing a 23% increase over the prior year’s corresponding period net profit of $128.31 million. Net Profit for the quarter however declined by 9% to close at $33.93 million relative to the $37.33 million booked for the corresponding period in 2018. The Company noted this was as a result of, “start-up expenses associated with our subsidiaries -KE Connect and KE Connect US. KE Connect has focused on providing connections and specialized local charters while KE Connect US, which began operations in January 2019, will target charters in South Florida market.

As February 28, 2019 assets totalled $1.02 billion, $360.06 million more than the $661.79 million recorded last year. The increase in total assets was largely due to increases in ‘property, plant and equipment’ and by $291.67 million to total $707.60 million (2018:$415.94 million). KEX noted, “This was as a result of continued investment in coaches and new investments in growth and initiatives to strengthen and diversify of our income stream. These investments include acquisition of commercial real estate for a future logistics development project in Draux Hall, St. Ann and the acquisition of KE Connect US the bus and coach charter company in South Florida. These investments were partly financed by a 5-year unsecured bond issue of $150 million arranged by Proven Wealth.” 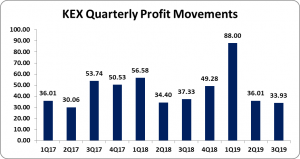