Claims expense soared to $1.12 billion from the $334.06 million recorded in 2017. Management stated, “The primary contributor is the increased book of business with associated high risk factors. Actuarial adjustment of $126,000,000 for the year is the other component that has influenced the negative trajectory in our claims experience. However, pursuant to the directive from the Board during the third quarter, management has strengthened its risk assessment and pricing policies designed to improve the quality and profitability of new business written. The initial effect has resulted in the reduced premium growth of 20% between October and December 2018 for the comparative period. The claims profile is a reflection of the business written. The corollary improvement in the net claims expense will be reflected in 2019 and beyond as these improved underwriting practices are realized. This new risk management focus was facilitated by the restructuring of the Underwriting team along with the requisite external consultant injection. Additionally, a new Risk management unit has been instituted that is twinned with reinsurance and charged with the responsibility of proactively reviewing the risk-premium profile shift to provide operational assurance that these measures are effective and equates to the improvement in our underwriting performance. Management has also taken action to expedite implementation of its Information Technology strategy to improve internal processes and customer experience.”

A gain of $119.17 million was recorded for Reinsurance recoveries, while administration and other expenses inched down 6% to close at $402.12 million compared to $428.81 million recorded in 2017. Change in unexpired risk reserves for the year closed at a negative $33.30 million versus $8.12 million.

Total comprehensive loss for the year amounted to $195.55 million, in contrast to an income of $77.54 million.

KEY also added, “Cost management continues to be a key focus of our organisation in that administrative expenses represent 23% of what was required to drive the 2018 premium. This is an improvement over 2017 as administrative expense was 30% of the gross premium written. Non-operating income for 2018 improved by $45,532,000 as a product of the composite strategy of investment of cash from our increased book of business and agile movement of our investment assets.” 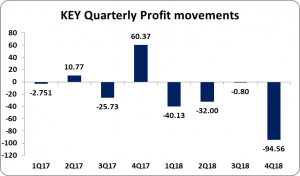