Changes in insurance reserves for the period was nil relative to $152,000 booked for the corresponding quarter.

No amortization of underwriting assets was booked for the period under review relative to $323.14 million recorded for the quarter ended March 31, 2020.

There was an underwriting loss of $37.11 million for the first quarter compared to a loss of $515.91 million reported in 2020. Management noted that this improvement is, “largely due to better underwriting practices being employed since last year resulting in reduced loss ratios when compared to the prior year corresponding period.”

Profit before taxation for the quarter closed at $1.16 million compared to a loss of $507.92 million. A taxation of $385,000 was booked for the quarter (2020: tax credit $169.31 million), which resulted in a net profit for the period of $770,000 (2020: net loss $338.62 million). Management noted, “This is the third consecutive quarter KEY is reporting a profit, demonstrating the benefits being realised from the continued execution of the Company’s turnaround plan.”

Total comprehensive loss for the quarter amounted to $3.67 million, in contrast to a loss of $352.55 million recorded twelve months earlier.

KEY highlighted, “During the quarter, KEY sold its investment property realising a gain on the sale of $22.6 million which contributed to the Company’s ability to better meet its capital adequacy requirements.” 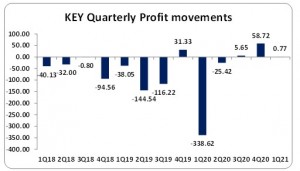