There was no change in insurance reserve and change in unexpired risk reserves for period under review versus $1.07 million and $8.94 million recorded twelve month earlier, respectively. Amortization of underwriting assets stood at $323.14 million (2019: nil) as at September 2020.

KEY highlighted, “these results are attributable to the successful implementation by management of the Company’s strategic initiatives, including a focus on the company’s customer centricity and improving underwriting practices, as well as adopting more effective risk management practices and enhancing investment returns. The Company expects to meet its financial targets for 2020, despite the ongoing challenges attributable to the COVID-19 pandemic, as management is confident that these initiatives will continue to drive positive results for the rest of 2020 and into 2021.” 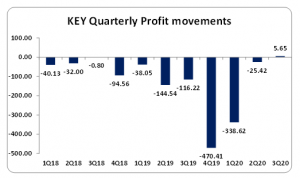