K.L.E. Group Limited (KLE), for the nine months ended September 30, 2018 reported Revenue for the period of $162.67 million, relative to $158.19 million last year. For the third quarter revenue totalled $52.63 million, relative $54.46 million last year, a 3% decline. This was due to the major road work happening on Constant Spring Road as well as there were fewer guest visiting the restaurant when compared with the similar period in the prior year.

Other operating income for the period increased by 63% to $17.70 million (2017: $10.87 million), while administrative and other expenses increased to $114.31 million (2017: $96.30 million). KLE noted, “Expenses that showed the major increases were salaries and related cost, legal and professional fees, marketing and advertising and general repairs. These are all consistent with the growth and development of the business. The increased operating expenses should result in increased profitability in the periods to come.”

The company stated that, “The horizons for the company continues to be bright as we continue to uncover cutting edge ideas and techniques of streamlining the business to increase efficiencies, reduce cost, maximize profits and generate positive returns for its shareholders. The company is expected to continue improving its revenues and profits during the rest of the year despite the ongoing challenges currently being faced by the current roadworks on constant spring road.

Under the ‘FranJam’ banner our franchises continue to do well, both are getting into full gear in preparation for the winter tourist season. Revenues from this arm is set to increase in the very short term with the opening of the first UK restaurant on October 10 ,2018. This has also set the tone for many other franchising prospects in various major cities all around the world.

The ‘Bessa’ project is ongoing and the first phase is completed which includes the model units (pool villa), pool and common areas, landscaping, entrance gate and guard house. There is much excitement about the project as there has been numerous expressions of interest in the property. The project has a scheduled completion date of August 2020. As the company takes aim at the global market, it remains resolute to its shareholders, employees, clients and customers by sustaining profitability and preserving the authenticity of its brands.”

KLE further added, “KLE Group continues to maintain its positive working capital ratios with the company’s current Assets being greater than its current liabilities. As management continues to effectively grow revenues which will result in an increase in the company’s performance we can expect the company to improve its level of liquidity and improve on its current ratios.” 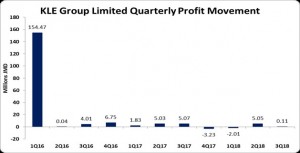