Consequently, profit from operation amounted to $14.91 million in contrast to the $9.98 million for the same period last year, this represents a 49% increase.

The company recorded finance income of Nil relative to $155.54 million last year. Finance and depreciation costs declined to $7.8 million when compared to $11.01 million for the same period of 2016.

This further resulted in a net profit for the period of $7.12 million compared to net profit of $154.15 million for the comparable period in 2016. 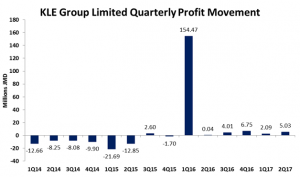