Other operating income declined by 35% to $10.36 million relative to $15.86 million. In addition, Administrative and Other Expenses decreased by 2% from $74.42 million in the first half of 2018 to $72.69 million for the same period of 2019. Management noted, “This is in line with management’s drive to reduce expenses and increase profitability. The company is getting more efficient operationally and further increase in profitability is expected as a result.”

Consequently, profit from operation amounted to $10.18 million in contrast to the $12.14 million for the same period last year, this represents a 16% reduction. For the quarter, KLE booked $4.47 million, down 51% compared to the $9.13 million reported for the second quarter of 2018.

Finance and depreciation costs increased to $10.53 million when compared to $8.27 million for the same period of 2018.

Management noted, “KLE’s recent efforts to refinance the high cost debt and reduce payables carrying from previous years has improved the company’s financial position and will enable us to capitalize on growth opportunities ahead.” 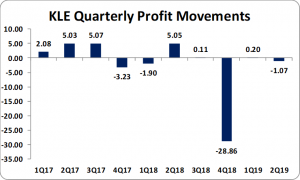