As such, Results of operating activities before other gains amounted to $61.36 million, a 155% increase (2018: $24.11 million) compared to the corresponding period in 2018. While, for the quarter, results of operating activities before other gains closed at $38.93 million (2018: $13.98 million). The Company mentioned, “This was primarily due to a net fair value gain on investment property of $23.8 million, after recording a loss on disposal of investment properties following the sale of two condo units in Florida, as well as, an impairment loss of $4.2 million due to the Group’s adoption of IFRS 9.”

Taxes of $1.84 million were booked compared to a tax credit of $30.87 million last year. Net Profit for the period was $28.61 million compared to $63.47 million for the similar period last year. Net profit for the quarter fell to $9.42 million (2018: $26.13 million). The Company highlighted, “This was primarily due to a combination of nearly $31 million of unrealized foreign exchange gains plus another $31 million of tax credits in 2018; compared to $6 million in unrealized foreign exchange losses and a $1.8 million tax charge in H1 2019.” 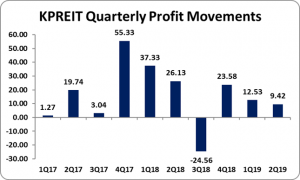