As such, Results of Operating activities before other gains amounted to $71.198 million, a 10.95% increase when compared to the $79.95 million posted last year.

Fair value loss on investment property totalled $4.30 million for the period relative to the previous year’s gain of $11.71 million.

Operating profit closed the year at $24.03 million, this compares with the $92.77 million booked a year ago. This was due to of $46.93 million reported for  disposal of investment property in 2018 relative to nothing reported in the previous year. 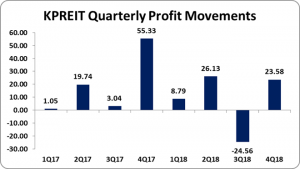