For the three months ended May 31, 2020, Caribbean Cream Limited (KREMI)’s turnover rose by 3% to $429.98 million (2019: $417.67 million). According to the Company, “sales was able to increase during the pandemic due to our distribution model that delivers products directly to neighborhoods and communities. There was an increase in demand for comfort food, including Ice Cream.”

Cost of sales also increased by 3% to $291.55 million (2019: $282.64 million), while, gross profit increased by 3% to $138.42 million compared to $135.02 million in 2019. KREMI noted, “CCL was able to maintain gross profit margins compared to last year, despite higher cost of raw materials and imported novelties. This was accomplished through productivity gains in our manufacturing process.”

Administrative expenses rose by less than 1% to close at $91.96 million (2019: $91.72 million). In addition, selling and distribution costs declined by 15% from $14.88 million in 2019 to $12.59 million. According to management, “this reduction was because of the lower marketing expenditure due to COVID-19 restrictions.” Consequently, operating profit for the quarter amounted to $33.87 million, up 17% relative to the $29.02 million booked in the prior year.

No other income was booked for the period under review versus $592,350 documented in the same period last year.

Consequently, profit before taxation amounted to $30.92 million relative to $23.57 million in 2019 representing a 31% increase year-on-year for the period.

Taxes of $3.87 million were charged for the period relative to $2.95 million booked in the corresponding quarter in the prior year. As such, net profit attributable to shareholders increased by 31% from $20.62 million in 2019 to $27.06 million. 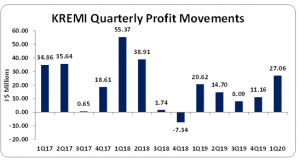