Caribbean Cream Ltd. (KREMI) for nine months ended November 30, 2022 reported a 19% increase in revenue totalling $1.83 billion compared to $1.54 billion in the corresponding period last year. Revenue for the second quarter rose 15% to close at $575.59 million compared to $500.51 million for the comparable quarter of 2021.

Administrative expenses rose by 12% to close at $423.73 million (2021: $378.06 million), while selling and distribution costs increased by 8% from $46.94 million in 2021 to $50.91 million in the period under review. As a result, operating profit for the nine months period amounted to $51.32 million, a 16% decrease relative to $60.77 million reported twelve months earlier. Management noted that, “The increase is driven by continued higher material prices, electricity rate increases and repairs and maintenance.” 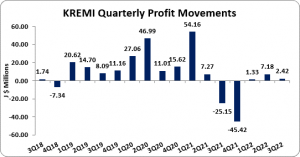