Caribbean Cream Ltd. (KREMI) for six months ended August 31, 2021 reported a 16% increase in revenue totalling $1.03 billion compared to $891.40 million in the corresponding period last year. Revenue for the second quarter rose 5% to close at $486.25 million compared to $461.42 million for the comparable quarter of 2020. KREMI sales during the quarter was impacted by tighter COVID-19 measures as Management highlighted, “No movement days imposed on the country in two 3-day periods of Sunday to Tuesday and during the Independence and Emancipation Day holidays, eviscerated a major portion of our sales revenue. Nevertheless, we are thankful for the increase in sales.”

Costs of sales amounted to $673.76 (2020: $581.73 million), this represents an increase of 16% year over year. During the quarter, KREMI experienced higher utility costs, preice increases in key raw materials and an increased foreign exchange rate. Costs associated with logistics due to hemispheric shortfall in shipping containers and a higher importation charges for imported novelties were attributed to the increase in cost of sales. Consequently, gross profit increased by 17% or $51.26 million to $360.93 million compared to $309.67 million for the period ended August 31, 2020. The Company booked gross profit of $153.41 million for the second quarter versus $171.25 million reported for the similar quarter of 2020.

Administrative expenses rose by 32% to close at $249.01 million (2020: $188.27 million), while selling and distribution costs increased by 8% from $28.11 million in 2020 to $30.48 million in the period under review. As a result, operating profit for the six months period amounted to $81.44 million, a 13% decrease relative to $93.29 million reported twelve months earlier. Management noted, “we had planned for higher expenses (mainly for the full-year impact of our Ocho Rios Depot) to sustain our increased sales. The increases are also attributed to: 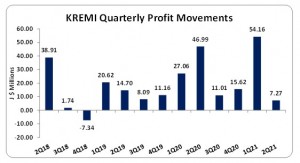