Kingston Wharves Limited (KW) for the three ended March 31, 2021 reported total revenue of $1.85 billion, a 1% decline relative to the $1.88 billion recorded for the corresponding period in 2020.

The Company noted, “The 2021 first quarter will be the last time that we compare the current results of operations for KWL with a reporting period before the full onset of the Covid-19 pandemic and all of its associated restrictions on global travel, social engagement and general business activity. Despite the ongoing challenges associated with the pandemic, we have recovered much of the lost ground.”

Other operating income for the period totaled $119.96 million relative to the $140.35 million booked in the prior corresponding quarter.

Administrative Expenses for the period climbed fell 7%, amounting to $314.85 million from the $337.33 million recorded for the same quarter last year.

As such, Operating Profit closed the three months period at $680.72 million, a 7% decline relative to the $735.29 million recorded for the comparable period in 2020.

Taxation charges amounted to $84.71 million for the period, a 36% decline relative to the charges of $133.20 million incurred for same period last year.

Notwithstanding, Net Profit for the period fell marginally by 0.3% to total $560.25 million relative to $561.94 million recorded for the corresponding period in 2020.

Net Profit attributable to shareholders fell by approximately 1% to total $547.77 million relative to $553.73 million recorded for the corresponding period in 2020.

KW noted, “KWL continues to tap into technology to enhance our processes and have implemented a contactless cargo clearance platform “Click N Collect”, and an e-Services platform as a onestop-shop for all its online payment options. These tools are an essential component of the company’s effort to improve customer convenience, reduce in-branch activity and help in the fight against COVID-19.” 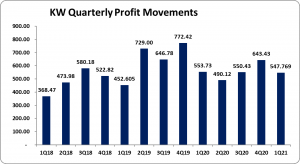