For the nine months ended September 30, 2019, Kingston Wharves’ revenue totaled $5.72 billion a 9% increase when compared to $5.26 billion for the corresponding period of the prior year, while revenue for the second quarter grew 3% to $1.92 billion (2018: $1.87 billion). This as both the company’s ‘Terminal Operations’ and ‘Logistics & Ancillary Service’ segments reported increases.

Management indicated, “KWL continues to pursue a range of effective growth strategies to maintain and improve profitability in the face of significant changes in the global shipping and logistics business as a result of changing trade rules. KWL operates at the heart of the Caribbean trade and, as such, we continue to distinguish ourselves by tailoring our services directly to the needs of regional importers and exporters who depend upon timely receival and delivery of cargo via the port of Kingston as well as our investment in specialized cargo handling capabilities and systems that meet their unique needs. This direct attention to handling the cargo requirements of Caribbean businesses and connecting Caribbean producers and consumers to the world for a wide range of cargo types (including bulk, break bulk automotive and containerised cargo) has allowed the business to continue to deliver satisfactory results.”

In addition, the Company also noted, “we are building upon our established platform and track record in terminal services with the continued development of our full-service logistics capabilities. This will see us adding more warehouse space and seeking to take advantage of the Special Economic Zone legislation to attract new business, investment, trade and export opportunities to Jamaica’s manufacturing, food processing and services sector.” 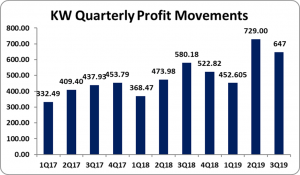