The ‘Terminal Operations’ which accounted for 69% of total revenues, rose 21% year over year to a total of $5.99 billion relative to $4.96 billion last year. According to KW, “The Kingston Wharves terminal made a significant contribution to the company’s results, with terminal services accounting for over two-thirds of Kingston Wharves’ revenues and profits. The terminal maintained its position as a 24-hour, 365 day port services operation, and met its objective of providing efficient and reliable service to vessels using Kingston as a strategic gateway for the movement and handling of cargo in and out of the region.”

The company’s ‘Logistics & Ancillary Services’ grew 23%, to total $2.68 billion, up from $2.18 billion booked twelve months earlier. The company highlighted that, “The Logistics Services Division maintained its position as a solid contributor to the profit of KWL, having grown consistently over the past several years in line with trends towards the development of e-commerce, increased attention to inventory control by businesses a general expectation of efficient service, and continuous improvement and modern professional standards by supply chain partners.”

Total comprehensive income for the year end closed at $6.80 billion (2020: $3.37 billion). In addition, net profit attributable to shareholders rose by 43% to total $3.20 billion relative to $2.24 billion recorded for the corresponding period in 2020. Net profits attributable to shareholders for the quarter amounted to $1.16 billion, a 80% increase relative to the $643.43 million recorded for the same quarter of 2020. 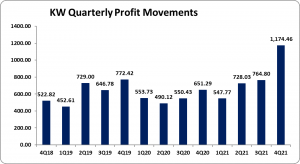