The Terminal Operations division generated operating revenue of $5.60 billion (2021: $4.81 billion) for the nine-month period, representing an increase of 16% over the corresponding period of the prior year. According to KW, “The improved performance in this division was driven by the continued increase in the company’s transshipment container and motor unit business.”

The company’s Logistics Services Division generated revenues of $2.17 billion, reflecting a 10% increase over the prior year.

Finance costs for the period declined 9%, to close at $82.14 million relative to $90.24 million booked for the corresponding period in 2021.

According to Management, “Kingston Wharves is well placed to capitalize on the increased business confidence in Jamaica and the growing international demand for shipping and logistics services from manufacturers and distributors who are diversifying their supply chains in response to the global shocks of the last three years. The Group is leveraging its expertise to meet the demand of the marketplace, and its services as a global motor vehicle transshipment hub and a regional hub for containerized cargo remain in high demand.” 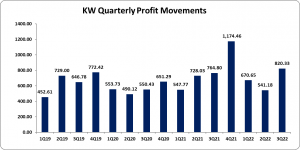