The Company reported a 42% increase in administration expenses to $75.01 million (2021: $52.67 million) due to “staff costs, repairs and maintenance of production equipment and depreciation and amortization costs.” as per LAB. Also, selling and distribution costs for the quarter totaled $390,747 compared to $504,095 for the previous period. Therefore, total operating expenses amounted to $75.40 million, a 42% increase from the previous period which was $53.17 million. However, profit before net finance cost and taxation rose by 9% to $67.47 million (2021: $62.01 million).

The Company reports a loss in value of investment classified as FVTPL of $21,490, relative to a gain of $80,586 booked in 2021 corresponding quarter. 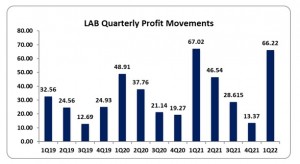