Lasco Distributors Limited (LASD), for the three months ended June 30, 2019, posted a marginal increase in revenue to $4.34 billion, up from $4.28 billion in the corresponding period in 2018.

Cost of sales amounted to $3.47 billion, up 2% on the $3.41 billion reported in the prior comparable period. Consequently, gross profit recorded a  marginal decrease year over year, closing at $864.70 million compared to the $871.44 million generated for the same period in the prior year.

Other operating income rose by 23% to end the three months at $52.66 million relative to $42.70 million in the corresponding period last year.

Net profit for the period closed at $163.91 million (2018: $233.64 million), a 30% decline year over year following taxation of $23.16 million (2018: $19.93 million). LASD stated that, “the decline is heavily attributable to one off restructuring expenses and legal fees associated with ongoing matters including Pfizer case, we have invested significantly in the continued increase of fleet resources to better reach and serve our smaller retailers nationally. We expect the negative impact of these mostly one-off expenses on profit to be diminished going into the following quarters of the year as we continue to drive top line revenue above last year and effectively implement our long-term expense management strategies to continuously improve profits.” 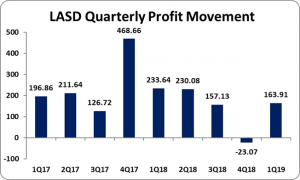