Management noted that, “the increase in operating expenses was due to increased security and depreciation charges associated with the newly built warehouse space as well as increased marketing support, particularly in the liquid beverage category to support continued drive to increase market share. We have also bolstered our sale steam and fleet to expand our reach to smaller shops, bars and groceries.”

LASD mentioned that, “the decline in net profit was heavily impacted by the one-off Pfizer payment ($273M) received in the last financial year.” 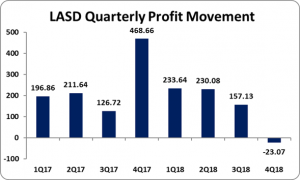