LASF recorded trading income of $302.68 million; this represented a growth of 27% or $65.2 million compared to the $237.48 million for corresponding period in 2016.  Other income amounted to $16.54 million (2016: $23.17 million), a decrease of $6.63 million which resulted in total income of $319.23 million, a growth of 22% compared to the $260.65 million for corresponding period in 2016. According to management, “In the previous Financial Year we began our implementation of the strategy to expand our Loans Division by adding a Business Loans Unit. During this first quarter, we began the reorganization of the division to give us deeper scope and welcomed Frank Whylie, Business Loans veteran to the LFSL team.”

Operating expenses amounted to $235.93 million, 24% more than the $190.73 million the year prior. This as selling and promotional expenses increased by 31% for the quarter to close at $122.21 million compared to $93.28 million for the same period last year, while administrative expenses rose by 17% to $113.72 million (2016: $97.45 million). LASF noted that, “the expansion of its loans division “gave rise to several new loan offices as well as an increase in administrative and sales staff.”

Despite the increase in total expenses, profit from operations grew by 19% to total $83.3 million, relative to the $69.93 million recorded last year.

Tax charges for the period were $14.28 million relative to $11.92 million for the corresponding period last year. Net Profit attributable to shareholders totaled $66.87 million, relative to the $57.73 million booked for 2016. 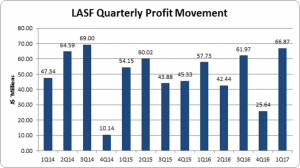