Operating expenses amounted to $1.27 billion, 55% more than the $819.84 million the year prior. According to management, “This is mainly due to the expenses from the Subsidiary and general growth in business which would not have been reflected in the previous year.” Of this administrative expenses rose by 47% to $635.66 million compared to the $431.08 million in 2017. Selling and promotional expenses also grew 64% to close at $635.85 million relative to the $388.75 million report in the prior period.

LASF noted, “These results reflect the business one year after the acquisition of Scotia Jamaica Microfinance Limited (which was renamed LASCO Microfinance Limited). Accordingly, we are pleased to demonstrate that LASF is able to generate strong operational profits to cover the increase in business and the additional finance costs associated with the acquisition and increase in transactions.” 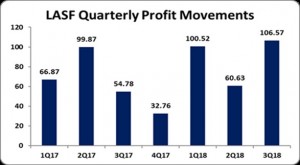