Lasco Financial Services Limited (LASF), for the three months ended June 30, 2018, recorded for the three months ended June 30, 2018, a total of $526.05 million in Trading Income; this represented a growth of 74% relative to the $302.68 million recorded in the comparable quarter in 2017. According to the Company, this was “driven by our growth in transactions.”  The Company also highlighted , “Of note for this financial period is the positive contribution of the newly acquired LASCO Microfinance Limited. Just above half of the increase in income was contributed by loans”. Other Income for the quarter also amounted to $28.47 million, a rise of 72% compared to $16.54 million in 2017. Consequently, this resulted in an overall gross profit of $554.51 million for the quarter, a growth of 74% compared to $319.23 million in 2017.

The Company noted “Subsequent to the financial year end, LFSL embarked upon a re-organization whereby it’s Loans Division was merged with LASCO Microfinance Limited, giving rise to a large loan company with a powerful brand presence through thirteen (13) branches island wide. The focus of the newly organized group will be allocated such that LFSL; the parent will concentrate on its core activities, Cambio and Remittance services in Jamaica and LASCO Microfinance limited will focus on providing credit in pursuit of financial inclusion.” 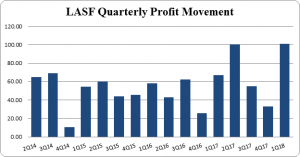