Lasco Financial Services (LASF), recorded for the six months ended September 30, 2020, a total of $1.15 billion in Trading Income; this represented a 6% decline relative to the $1.22 billion recorded for the comparable period in 2019. LASF stated, “The 5.7% decline is largely due to the fall in revenues from our Subsidiary Loan company by $152.2 million, a reduction of 34.5% when compared with the previous financial period. There was, however, a compensating increase of $50.4 million or 11% increase in revenues from remittance transactions and a $33.5 million or 10.8% increase in Cambio Revenues. The loan business continues to experience the residual impact from the effects of the COVID pandemic, whereas the money service business showed strong quarterly growth.” For the quarter, Trading Income closed at $614.61 million (2019: $630.06 million), a fall of 2% year over year.

Operating Expenses for the period closed at $960.90 million, which is 9% less than the $1.06 billion recorded in September 2019. Of this, Administrative Expenses decreased by 1% amounting to $523.10 million relative to $530.33 million in 2019, also, Selling and Promotional Expenses declined 17% to close at $437.79 million (2019: $530.59 million).  Management stated, “At the onset of the COVID pandemic several initiatives were put in place to control non-essential expenditure, as such there was a 32% reduction in expenses in the quarter.”

LASF noted, “Contributing to the improvement in performance is the decision by the business to place its focus on assisting its existing customers to navigate their business challenges using moratoriums and cash preservation strategies. There will now be a shift towards lending again, however, as opportunities for lending are now beginning to manifest as businesses are adjusting to the new normal, with some embracing new opportunities.”

Additionally, LASF highlighted, “The general direction of the LASF group is an indication of the growth potential and sustainability of our business model: financial Inclusion, micro finance and micro payments. As such, we were pleased to participate in the disbursements of the Government of Jamaica’s CARES Grants through our well diversified agent network during the quarter. Also, over the course of the pandemic and continuing, we were able to display our diversity in payment services, allowing customers to receive remittances directly to their bank accounts as well as to their LASCO Pay prepaid card, serving our customers in store and online. While we progressively enable our customers towards digital services, LASF will continue with its blended operations to support its large cash network to bring value to our agents on a sustained basis.” 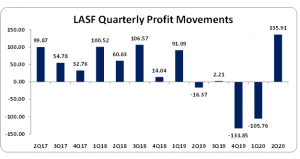