Operating Expenses for the period closed at $837.27 million, which is 65% more than the $506.41 million recorded in September 2017. Selling and Promotional Expenses increased by 70% amounting to $432.77 million relative to $254.24 million in 2017, while Administrative Expenses rose 60% to close at $404.50 million (2017: $252.17 million). Management indicated that, “this is mainly due to the expenses from the Subsidiary which would not have been reflected in the previous year. Subsequent to the acquisition in December 2017 and ensuing merger of the loans business of LFSL into the subsidiary, there has been additions of staff and investments in technology and infrastructure to support the growing customer base and workforce. These investments are key to the development of the business to support the planned growth and market presence.”

Finance Cost amounted to $81.13 million for the period (2017: $4.29 million), a gross increase of 1792%. The company will be contacted for more information regarding this drastic increase. As for the second quarter, Finance Cost totaled $40.43 million versus $2.14 million in the prior comparative quarter.

Lasco Financial Services (LASF) commented that, “The business continues to grow in spite of the challenges within the markets in which it serves. There is a general downturn in remittances; cambio spreads, though currently stable, has been the subject of occasional shocks which can have an impact on profits. The loans business though faced with aggressive competitive activity from other microfinance companies and commercial banks, is still able to carve out a market share to the benefit of its customers. 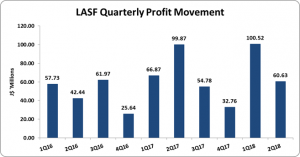