Lasco Financial Services (LASF), recorded for the six months ended September 30, 2021, a total of $1.08 billion in Trading Income; this represented a 6% decline relative to the $1.15 billion recorded for the comparable period in 2020. LASF stated, “Revenues generated from the Microfinance company, though incrementally improving, is still below that of the previous year. The overall performance is however in line with our targets and growth expectations.” For the quarter, Trading Income closed at $519.69 million (2020: $614.61 million), a fall of 15% year over year.

Other Income for the six months period amounted to $63.53 million significantly higher than the $8.05 million booked in 2020. Consequently, this resulted in an overall income of $1.14 billion for the six months, a decrease of 1% compared to $1.16 billion in 2020.

Operating Expenses for the period closed at $856.83 million, which is 11% less than the $960.90 million recorded in September 2020. Of this, Administrative Expenses increased by 6% amounting to $554.63 million relative to $523.10 million in 2020, also, Selling and Promotional Expenses declined 31% to close at $302.20 million (2020: $437.79 million).  Management stated, “Administrative expenses remained relatively flat but Selling and promotional expenses declined due to reduced promotional activity as well as the reduction in estimated credit losses.”

Finance Cost amounted to $93.35 million for the period (2020: $95.09 million), a decrease of 2%. As for the second quarter, Finance Cost totaled $45.61 million versus $45.33 million in the prior comparative quarter. LASF noted that, “LFSL marginally reduced its Financing costs as we have been paying down our debts and gradually building our cash flow.” 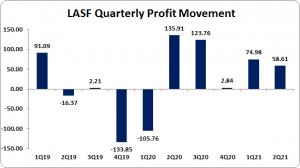