Lasco Manufacturing Limited (LASM) for the three months ended June 30, 2019 recorded an increase of 3% in total revenue to total $1.79 billion, relative to the $1.73 billion recorded for the comparable period in 2018.

LASM posted other income of $17.12 million, 476% more than the $2.97 million reported for the prior year. The company will be contacted to gain further insights on this vast increase.

Finance costs for the year increased 3% to $32.06 million compared to $31.22 million in the prior year’s comparable period. 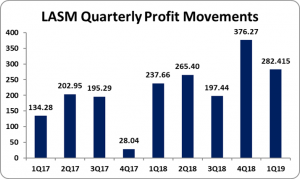