Operating expenses increased 5% to close the period at $970.31 million versus $920.35 million booked for the corresponding period last year.  Expenses for the quarter reflected a decline of 10% to close at $300.61 million (2016: $335.20 million). The company stated that the reduction in operating expenses during the quarter “reflected the effects of improved controls”.

According to LASM, “revenue and profits were impacted by a number of factors including the phasing down of production in the first two months (April – May), additional marketing and branding building investments to support the brands and distribution discounts to support sales.” The phasing down process allowed for plant upgrades to facilitate sustained improvements in output, cost efficiencies, and quality.  The company also noted that “the expected improvements have materialized and it is anticipated that this should continue.”

LASM also introduced a new juice drink “Guava Juice” adding to their existing portfolio and will launch a variety of carbonated beverages and an energy drink in the upcoming quarter. 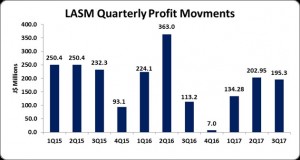