Operating expenses remained relatively flat to close the period at $307.57 million versus $308.37 million booked for the corresponding period last year.

Finance costs for the year increased 4% to $31.22 million compared to $30.08 million in the prior year’s comparable period.

LASM stated, “The positive out-turn for the quarter reflects growth in volumes, improved operational efficiencies and streamlining and cost controls.” 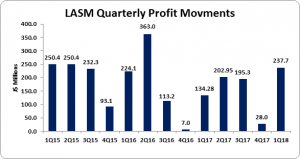