Moreover, the Company reported an impairment gain on trade receivables of $6.05 million relative to the gain of $6.44 million a year prior.

Administrative and other expenses closed the period at $39.67 million, 8% higher than the $36.75 million in the three months ended July 2021.

Management noted that, “During the First Quarter, our customer base reacted to uncertain economic conditions, including high interest rates and a spike in commodity prices for certain key hardware items. This led to some softening in sales and some compression in gross margins (20% in the First Quarter, relative to 24% in the first quarter of the prior year).” 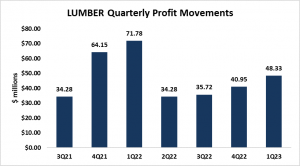