Finance and policy costs for the quarter totalled to $13.90 million, up from $6.29 million booked in the prior comparable period. Consequently, MAILPAC booked profit before taxation of $103.36 million for the three months ended March 2021, relative to $101.91 million booked for the previous corresponding period. 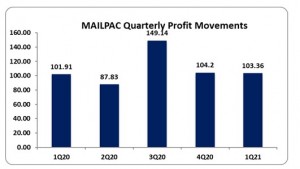