Mailpac Group Limited (MAILPAC)’s revenues amounted to $806.76 million for the six months ended June 30, 2022, reflecting a 10% year over year decrease from $896.06 million booked in 2021. While, for the quarter, revenues closed at $408.29 million (2021: $426.05 million). According to management, “In Q2 2022, Mailpac performed significantly better than the previous quarter and has already closed much of the gap compared to the comparable quarter in 2021 – a period bolstered by the lack of movement during the pandemic.”

Furthermore, “However, the Company and industry continue to be affected by supply chain challenges and record levels of inflation. However, Mailpac is already seeing the benefits of its cost-cutting initiatives and customer entrenchment strategy, as the Company continues to lead the e-commerce market in providing unmatched services to e-commerce consumers.”

Operating expenses for the period under review closed at $221.83 million, 5% higher than $212.08 million booked twelve months earlier. Management noted that, “Fixed expenses remain in line with management’s goal of keeping operational cost flat despite the meaningful inflation in the economy. Most of the fixed expenses include the operating cost of our stores and the broad base of staff who facilitate clearance, delivery, and customer servicing.”  Of this:-

MAILPAC noted, “While the Company continues to face pressure from inflation and increased travel, Mailpac continues to innovate and is preparing to launch novel solutions that will enhance the value and efficiency our customers garner from shopping online.” 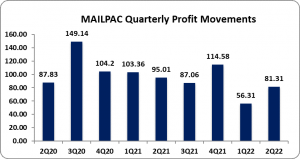