Medical Disposables & Supplies Limited, for the six months ended September 2019 reported Revenue amounting  $1.12 billion, an increase of 8%, relative to $1.04 billion booked the previous year. For the second quarter revenues totalled $565.04 million up 13% year over year (2018: $500.85 million). MDS noted, “This positive performance arose mainly from growth in sales in the pharmaceutical and medical segments with the new product lines showing encouraging results to the consumer segment.”

Total operating cost closed the period at $207.44 million, up 23% (2018: $169.24 million). Of this, selling and promotional costs went up 34% to $86.95 million (2018: $64.79 million). In addition, administrative expenses increased by 13% to $109.38 million from $96.76 million last year. Notably, the company booked other operating income of $2.87 million for the period ended September 30, 2019 relative an income of $2.68 million of the same period in 2018. The company highlighted that, “as part of its growth strategy, the Company continues to focus on expanding its product range, primarily in the Consumer and Medical Divisions.  This initiative has been accompanied by increases in the staff compliment and increased selling and distribution costs which are required to support the growth in business activity.” Depreciation for the first six month amounted to $14.38 million, 18% more than the $12.23 million reported in 2018.

The company’s loss on foreign exchange was reported at $19.91 million compared a loss of $20.11 million in 2018 which according to management, “resulted from better management of the effects of the devaluing Jamaican dollar during the quarter.” Finance cost increased by 25% to total $21.74 million (2018: $17.37 million). Furthermore, Gain on disposal of property, plant and equipment was $1.15 million (2018: nil).

Also, MDS mentioned, “as the company is poised to maximise increase in shareholder value from opportunities in the market; we will continue to value our customers, shareholders and MDS family for their confidence and continued support over the years.” 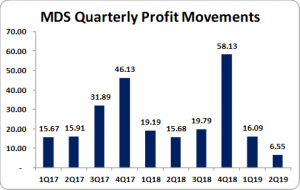